The Minor Railways of East Anglia 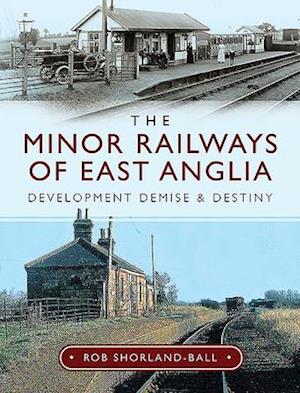 Rob Shorland-Ball is a former teacher and a born story teller and so is well aware of the strong local loyalties in East Anglia.

Norfolk, Suffolk and Essex are considered to be very different separate and independent areas by their inhabitants.

When the author worked in Suffolk he explained that he came from Cambridge which he believed was the front door of East Anglia, an elderly Suffolk man to whom he was speaking, paused for a while and then said, with unarguable finality, "Here in Suffolk if Cambridge exists at all, it is a back door and rarely used."

The minor railways illustrated in this book were once busy transport links and made vital contributions to the social and business heritage of the areas they served.

By the 1950s and 60s, when the author explored them, they were rarely used, so needed to be recorded and their stories told before they were forgotten entirely.

To bring this book up to date, the final section is called Destiny because some of the track beds have survived and flourished with new usage as restored heritage railways, footpaths and cycleways and one route as a busy busway.