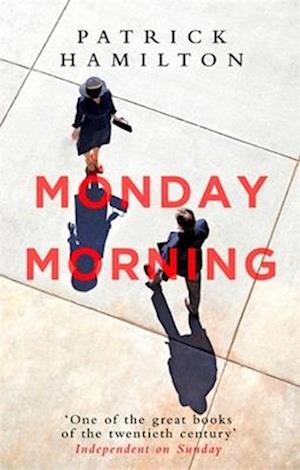 'If you were looking to fly from Dickens to Martin Amis with just one overnight stop, then Hamilton is your man' Nick Hornby'I recommend Hamilton at every opportunity, because he was such a wonderful writer and yet is rather under-read today. All his novels are terrific' Sarah WatersPatrick Hamilton's novels were the inspiration for Matthew Bourne's new dance theatre production, The Midnight Bell.'Beyond the fact that it was, in face of a vivid and calamitous ending, to reveal from his own experience the ardent splendours of Youth's adventure, he didn't quite know what his novel was going to be about.'Monday Morning wryly tells the story of Anthony, a young man taking his passionate first steps in life, in London, and in love. Not yet worn down by the world, Anthony is determined to write the novel that will bring him fame and fortune - and to marry the beautiful Diane. Patrick Hamilton's witty, playful first novel introduces us to the grimy world of metropolitan boarding houses and provincial theatrical digs that would be the setting for his later masterpieces Hangover Square and The Slaves of Solitude, and the hopes, dreams and regrets those who live there.