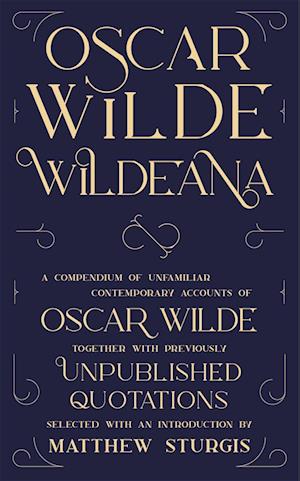 Oscar Wilde's early fame ensured that throughout his short life he was written about by many of those he met. He was celebrated - or mocked - as the master of the ingenious epigram, the provocative paradox, the witty aside or the extravagant conceit.

In researching his monumental biography of Wilde Matthew Sturgis found, in every major archive, sheets of foolscap in Wilde's distinctive handwriting, setting down a series of unfamiliar epigrams - unpublished try-outs. There were fascinating new discoveries.

He uncovered dozens of unfamiliar and previously ungathered anecdotes about Wilde: sidelights on his days in Oxford, London, America and Paris and beyond, by society hostesses, men-about-town, actors, lawyers, minor litterateurs, artists and politicians, diligently setting down his actions, his mannerisms and above all his sayings.

The items in this volume are all small additions to the Wilde story: some unfamiliar, others unexpected, they enrich and alter the picture of his life.