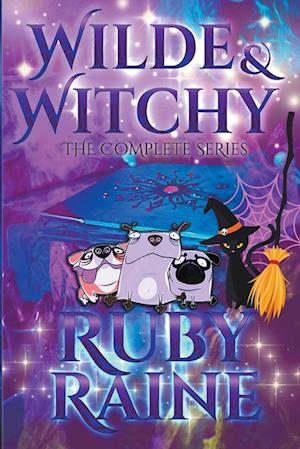 Sassy. Steamy. Magical -- "A cold shower is needed after reading this series " Dani doesn't know she's a powerful witch - her unknown protectors murdered before passing on their knowledge. Now, evil sets their murderous intent on Dani: wanted dead--not alive, before she discovers she's the only witch powerful enough to stop the ultimate evil from rising.

The Complete Series: Book 1: The Day the Witch Stood Still Book 2: Gone With the Wolves Book 3: A Mating Most Foul Book 4: When the Shift Blows Book 5: Phantom of the Opera House B&B Book 6: Someone to Witch Over Me Book 7: It's a Witchy Life (Series Finale)

All Dani Harper wanted was a vacation in the one place she could still call home.After tragedy strikes and she loses her mother, Dani needs a dose of the next best thing--her Aunt Marni, her three never-seem-to-age Siamese cats, some much needed summer sun, and endless moonlight and mojitos under the bright starry island sky each night.

What she got, was thrown into the middle of two murder investigations, an old flame--in the form of the sexy local police chief--telling her the supernatural not only exists, but that she's a witch with a price on her head. He offers protection from this supernatural hitman, but Dani soon finds out its her heart and soul that needs the protection most because she's falling--again--for Galen Wilde, and he's got a wicked supernatural secret of his own.