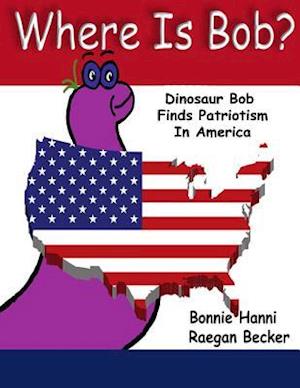 Where Is Bob? Dinosaur Bob Finds Patriotism In America Bob ?is a very large, purple dinosaur who wants to explore some of the major landmarks of the United States, such as, the Statue of Liberty, Lincoln Memorial, Mt. Rushmore, Washington DC sights along with civil rights becoming important in the 1960s with Martin Luther King. Bob is learning about pride, honor, and respect for the United States of America. Bob's friend, LooDawg, a silly green dog, takes him on a cross-country adventure. A fun-filled helicopter ride is also exciting for a Dinosaur and his friend. Bob learns to sing too. The action and adventure children's book includes the fascination and knowledge about the places of honor for famous presidents such as George Washington and Abraham Lincoln. The two fantasy characters learn about real places and times in past history. Also they learn which presidents made a difference in the United States as a country. Involvement in World diplomacy, independence, and democracy are characteristics based on the Founding Fathers of the United States. On each of our dollar bills ($1, $2, $5, $10, $20, $50, $100) an image of a time in history is portrayed, such as the signing of the Declaration of Independence; the White House, and images of Presidents. Children learn to recognize the different denominations of bills and will remember the story associated with the picture on each bill. Dino Dawg Series Kansas 2016