- Fourteen Histories Of The Hidden And Hunted In Nazi Germany 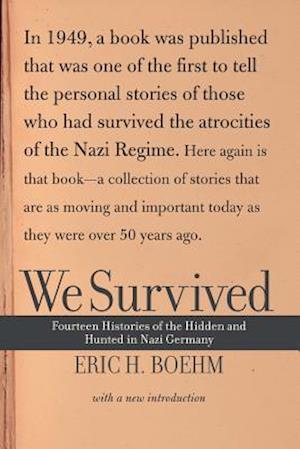 Thousands of Jews and Aryan" Germans opposed to Hitler led illegal lives under the Nazi terror and survived the relentless hunt of the Gestapo, the concentration camps, and the bombing. They survived in various ways some as ordinary citizens taking part in the work-day life, others with fake passports, hidden in cellars, living precariously in all the dark corners of a vigilantly policed country. In fourteen autobiographical accounts, author Eric Boehm offers a cross-section of these heroic personalities. We Survived is itself an historical document, giving a window back into this epoch period during World War II.Now reappearing in print over fifty years after its original publication, We Survived remains as relevant and necessary as ever before - an honest testimony to the strength of the human spirit when it triumphs over adversity.