Warriors: Omen of the Stars Box Set: Volumes 1 to 6

indgår i serie Warriors, Omen of the Stars 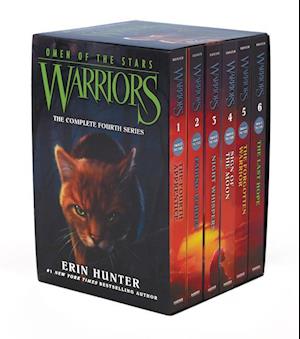 Erin Hunter's #1 nationally bestselling Warriors series continues in Warriors: Omen of the Stars! This box set-featuring striking new art-includes all six books in the fourth Warriors series, and is perfect for the collections of longtime Erin Hunter fans and readers new to the Warriors world. It has been foretold that Jayfeather, Lionblaze, and Dovepaw will hold the power of the stars in their paws. But dark shadows that have long preyed on the Clans are gaining strength, and as a catastrophic battle with the Dark Forest draws near, another, more ominous prophecy comes to light-and reveals that a fourth cat must join them in order to save the Clans.