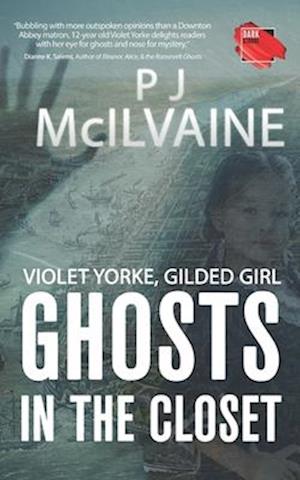 She sees ghosts...but are they malevolent or friendly?

Poor little rich girl Violet Yorke has seen ghosts for as long as she can remember, but no one believes her.

Not stodgy Grandmother, who took charge of the heiress after her parents were killed in a failed robbery. Nor kind-hearted Aunt Nanette, or Uncle Bertie, a charming rogue. Not even the patient Hugo Hewitt, Violet's godfather and trustee of her vast fortune.

Everyone dismissed the child's insistence about ghosts as a harmless eccentricity-until the night her bedroom caught fire. Violet was promptly sent overseas, fueling her anger and resentment.

Two years later, a rebellious twelve-year-old Violet is on her way back to Manhattan on the doomed Titanic. As the ship sinks into the deep Atlantic Ocean, she's put in a lifeboat by an apparition who rescued her from the clutches of a jewel thief. Presumed lost at sea, Violet shocks everyone by crashing her own funeral.

Following Violet's recovery, Grandmother has grand high society designs for the girl, but Violet has other ideas. She's determined to uncover the secret of what really happened to her parents. Then there's the mystery of the moon-faced boy at gloomy Dunham Hall and his connection to the ghost on Titanic. Also hot on Violet's trail is the jewel thief, the specter of her murdered governess, and a vengeful ghost lurking in Violet's childhood home.

Being a poor little rich girl in 1912 Gotham isn't all it's cracked up to be in this delightfully dark and droll supernatural historical fantasy.