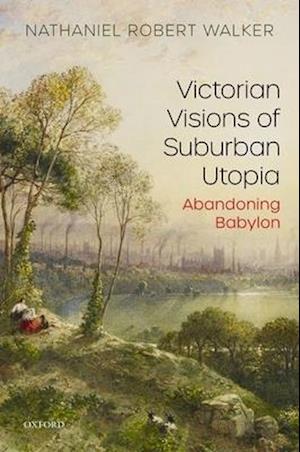 The rise of suburbs and disinvestment from cities have been defining features of life in many countries over the course of the twentieth century. In Victorian Visions of Suburban Utopia, Nathaniel Walker asks: why did we abandon our dense, complex urban places and seek to find "the best of the city and the country" in the flowery suburbs? While looking back at the architecture and urban design of the 1800s offers some answers, Walker argues that a greatmissing piece of the story can be found in Victorian utopian literature. The replacement of cities with high-tech suburbs was repeatedly imagined and breathlessly described in the socialist dreams and science-fiction fantasies of dozens of British and American authors. Some of these visionaries - such as RobertOwen, Edward Bulwer-Lytton, Edward Bellamy, William Morris, Ebenezer Howard, and H. G. Wells - are enduringly famous, while others were street vendors or amateur chemists who have been all but forgotten. Together, they fashioned strange and beautiful imaginary worlds built of synthetic gemstones, lacy metal colonnades, and unbreakable glass, staffed by robotic servants and teeming with flying carriages. As varied as their futuristic visions could be, Walker reveals how most of them wereunified by a single, desperate plea: for humanity to have a future worth living, we must abandon our smoky, poor, chaotic Babylonian cities for a life in shimmering gardens.

Forfattere
Bibliotekernes beskrivelse A study of British and American Utopian writing of the 1800s in the context of developments in real architectural, political, and cultural life. The book studies utopian visions published in the UK and the USA in the 1800s by writers such Robert Owen, James Silk Buckingham, Edward Bellamy, and William Morris. 138 Illustrations