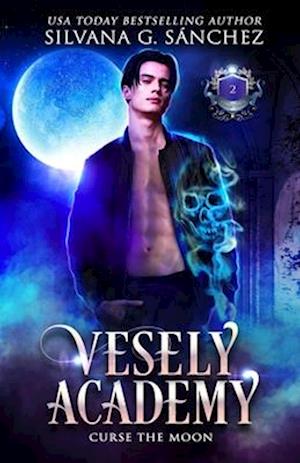 The world is a vicious monster. The moon, its accursed emissary.

When Kade warped out of Vesely Academy with the wolf shifter Laurent, he chose an unintended destination. As the top wanted criminals on the wards' radar, they're forced to lie low at his family's ancestral home.

Their hideout confronts Kade with his past in shattering ways. Most tormenting of all, is resisting the nearness of the man who stole his heart a decade ago. Kade's love for Laurent has been his greatest secret. He vowed to never drag him into his messed-up life.

But when an old flame of Kade's breaks into their lair, chaos ensues. Not only does the angel Cassiel know who killed the Brysons, but she's determined to win back Kade's love. Little does she know that a wolf shifter might hinder her plans. No one must have him, if not her. And God knows nothing is as dangerous as an angel's overzealous love.

Curse the Moon is a paranormal mystery adventure that portrays the becoming of a villain, whose outcome might not be what everyone expects. It features a pansexual antihero torn between two loves, who, although immensely flawed, has his heart in the right place.

Reading book one is strongly advised before diving into this installment.

Don't miss the second installment of Vesely Academy, a Forced Proximity, Yandere, and Friends to Lover's thrilling paranormal mystery that will keep you on the edge of your seat!