- When every suspect has a secret, how do you find the killer?

indgår i serie Pearson and Russell 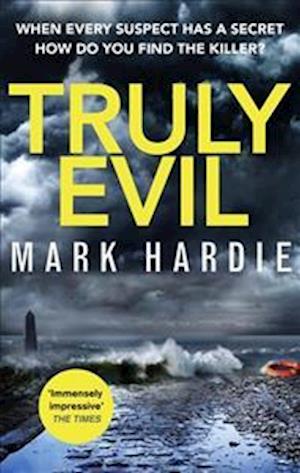 A BRUTAL ACT OF VIOLENCEA body has been found dumped on the shores of Southend. Already under scrutiny following the murder of a corrupt cop, DS Frank Pearson and DC Cat Russell of the Essex Major Investigation Team are tasked with solving the case quickly, and quietly.A WOMAN TOO SCARED TO TALKWhen the victim's identity is revealed, the list of suspects begins to grow: a young woman knows more than she's letting on, but is she really involved? Or there's the estranged father, who's been trying to find the victim for months. One thing is clear: no one is telling the whole truth.A KILLER BACK FOR MORE?Then a shocking tragedy leads Pearson to a similar murder case from decades before. Is it a coincidence, or is history repeating itself? As Pearson and Russell search for the answer, they find themselves drawn into a terrifying cover-up going back fifty years...If you like Peter James, LJ Ross, Erin Kelly, TM Logan and Patricia Gibney, then you'll love Mark Hardie's gripping novels.****Praise for Mark Hardie:'Immensely impressive' The Times'The investigation into a copper's dramatic death in downbeat Southend scoops a cast of equally downbeat characters into its net, and tensions rise as their stories fold around each other. An accomplished debut' Sunday Times'Emotional, intelligent, sensual and with such a strong voice, Burned and Broken by Mark Hardie is a crime debut that deserves huge success' Harry Illingworth (Goldsboro Books)'I absolutely LOVED, LOVED, LOVED this book and I would recommend it to anybody. I can't wait to read more investigations led by DS Frank Pearson and DC Cat Russell' Amanda Oughton (Ginger Book Geek)'The story is easy to follow without being too simple, and the novel really manages to evoke a sense of atmosphere and reality within its pages. I didn't find myself becoming distracted whilst reading at all, and raced through it in hours. I will certainly be reading any future novels, particularly in this series which I wholeheartedly enjoyed' Laura Naz (Snazzy Books)

Forfattere
Bibliotekernes beskrivelse DS Pearson and DC Russell return to the shores of Southend-on-Sea to investigate the murder of a young woman, which turns out to have unexpected links with long-buried case. Perfect for fans of Peter James.