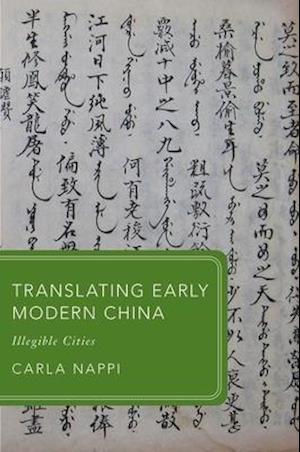 The history of China, as any history, is a story of and in translation. Translating Early Modern China tells the story of translation in China to and from non-European languages and Latin between the fourteenth and the nineteenth centuries, and primarily in the Ming and Qing dynasties. Each chapter finds a particular translator resurrected from the past to tell the story of a text that helped shape the history of translation in China. In Chinese, Mongolian,Manchu, Latin, and more, these texts helped to make the Chinese language what it was at different points in its history. This volume explores what the form of an academic history book might look like by playing with fictioning as part of the historian's craft. The book's many stories-of glossaries andofficial Ming translation bureaus, of bilingual Ming Chinese-Mongolian language primers, of the first Latin grammar of Manchu, of a Qing Manchu conversation manual, of a collection of Manchu poems by a Qing translator-serve as case studies that open out into questions of language and translation in China's past, of the use of fiction as a historian's tool, and of the ways that translation creates language.

Forfattere
Bibliotekernes beskrivelse A volume on translation and language in China from the fifteenth to mid-nineteenth centuries. It uses fictional narrative to discuss translators who worked between Chinese and (mostly) non-European languages and studies dictionaries, language primers, grammars, poetry collections, and conversation manuals.