- A History of the United States 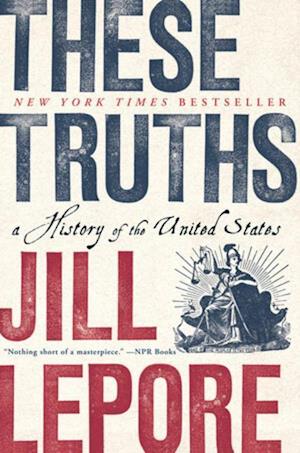 The American experiment rests on three ideas-"these truths", Jefferson called them-political equality, natural rights and the sovereignty of the people. And it rests, too, "on a dedication to inquiry, fearless and unflinching", writes Jill Lepore in a ground-breaking investigation into the American past that places truth at the centre of the nation's history. Telling the story of America, beginning in 1492, These Truths asks whether the course of events has proven the nation's founding truths or belied them. Finding meaning in contradiction, Lepore weaves American history into a tapestry of faith and hope, of peril and prosperity, of technological progress and moral anguish. This spellbinding chronicle offers an authoritative new history of a great, and greatly troubled, nation.

Forfattere
Forlages beskrivelse Widely hailed for its “sweeping, sobering account of the American past” (New York Times Book Review), Jill Lepore’s one-volume history of America places truth itself—a devotion to facts, proof, and evidence—at the center of the nation’s history. The American experiment rests on three ideas—“these truths,” Jefferson called them—political equality, natural rights, and the sovereignty of the people. But has the nation, and democracy itself, delivered on that promise?


These Truths tells this uniquely American story, beginning in 1492, asking whether the course of events over more than five centuries has proven the nation’s truths, or belied them. To answer that question, Lepore wrestles with the state of American politics, the legacy of slavery, the persistence of inequality, and the nature of technological change. “A nation born in contradiction… will fight, forever, over the meaning of its history,” Lepore writes, but engaging in that struggle by studying the past is part of the work of citizenship. With These Truths, Lepore has produced a book that will shape our view of American history for decades to come.