indgår i serie Dagger and the Coin 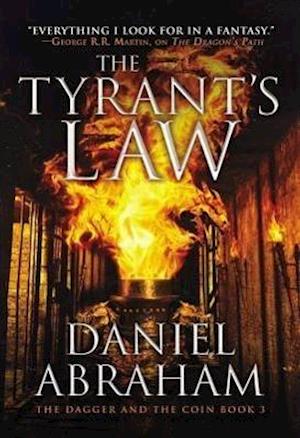 The great war cannot be stopped. The tyrant Geder Palliako had led his nation to war, but every victory has called forth another conflict. Now the greater war spreads out before him, and he is bent on bringing peace. No matter how many people he has to kill to do it. Cithrin bel Sarcour, rogue banker of the Medean Bank, has returned to the fold. Her apprenticeship has placed her in the path of war, but the greater dangers are the ones in her past and in her soul. Widowed and disgraced at the heart of the Empire, Clara Kalliam has become a loyal traitor, defending her nation against itself. And in the shadows of the world, Captain Marcus Wester tracks an ancient secret that will change the war in ways not even he can forsee. Return to the critically acclaimed epic by master storyteller Daniel Abraham, The Dagger and the Coin. The Dagger and the CoinThe Dragon's PathThe King's Blood The Tyrant's LawThe Widow's HouseThe Spider's War Writing as James S. A. Corey (with Ty Franck)

Forfattere
Bibliotekernes beskrivelse The great war cannot be stopped. The tyrant Geder Palliako begins a conquest aimed at bringing peace to the world, though his resources are stretched too thin. When things go poorly, he finds a convenient target among the 13 races and sparks a genocide.