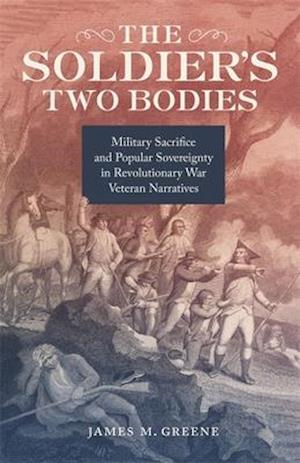 In The Soldier's Two Bodies, James M. Greene investigates an overlooked genre of early American literature--the Revolutionary War veteran narrative--showing that it by turns both promotes and critiques a notion of military heroism as the source of U.S. sovereignty. Personal narratives by veterans of the American Revolution indicate that soldiers in the United States have been represented in two contrasting ways from the nation's first days: as heroic symbols of the body politic and as human beings whose sufferings are neglected by their country.

Published from 1779 through the late 1850s, narrative accounts of Revolutionary War veterans' past service called for recognition from contemporary audiences, inviting readers to understand the war as a moment of violence central to the founding of the nation. Yet, as Greene reveals, these calls for recognition at the same time underscored how many veterans felt overlooked and excluded from the sovereign power they fought to establish. Although such narratives stem from a discourse that supports centralized, continental nationalism, they disrupt stable notions of a unified American people by highlighting those left behind.

Greene discusses several well-known examples of the genre, including narratives from Ethan Allen, Joseph Plumb Martin, and Deborah Sampson, along with Herman Melville's fictional adaptation of the life of Israel Potter. Additional chapters focus on accounts of postwar frontier actions, including narratives collected by Hugh Henry Brackenridge that voice concerns over populist violence, along with stranger narratives like those of Isaac Hubbell and James Roberts, which register as fantastic imitations of the genre commenting on antebellum racial politics.

With attention to questions of historical context and political ideology, Greene charts the process by which veteran narratives promote exception, violence, and autonomy, while also encouraging restraint, sacrifice, and collectivity. Revolutionary War veteran narratives offer no easy solutions to the appropriation of veterans' lives within military nationalism and sovereign violence. But by bringing forward the paradox inherent in the figure of the U.S. soldier, the genre invites considerations of how to reimagine those representations.

Drawing attention to paradoxes presented by the memory of the American Revolution, The Soldier's Two Bodies locates the origins of a complicated history surrounding the representation of veterans in U.S. politics and culture.