The Rise and Fall of Detente

- American Foreign Policy and the Transformation of the Cold War

indgår i serie Issues In The History Of American Foreign Relations 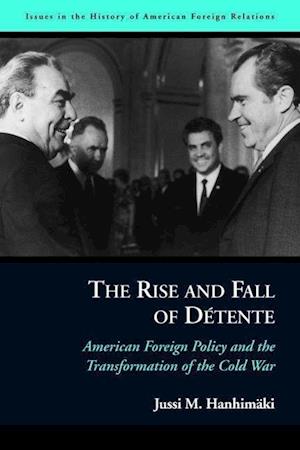 In keeping with the other titles in Robert J. McMahon's Issues in the History of American Foreign Relations series, Jussi M. Hanhimaki offers students and scholars a survey of the evolution of American foreign policy during a key period in recent history, the era of superpower detente and global transformation in the 1960s and 1970s. Describing detente as not only an era but also a strategy of waging the Cold War, Hanhimaki examines the reasons that led to the rise of detente, explores the highlights of the era's reduced East-West tensions, and explains the causes of detente's demise.

He addresses many questions: What were the long-term and short-term causes of detente? Was it a policy "invented" in the United States or adopted under pressure from abroad? Did it represent a radical break with the past--a move from idealism to realism--or was it simply an attempt to prolong the Cold War bipolarity within the international system? Was detente a policy that grew from weakness and doubt (caused particularly by the Vietnam War)? What were its main achievements and shortcomings? What led to its end? In conclusion, he evaluates the role of detente in the dismantling of the Cold War international system.