The Political Vindication of Radical Empiricism

- with Application to the Global Systemic Crisis

indgår i serie Toward Ecological Civilization 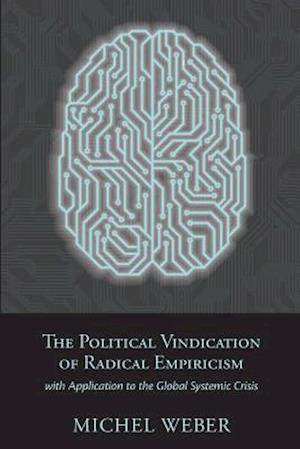 Michel Weber's brilliant analysis of our decadent democracies awakens us from the slumber of indifference and conformity. The philosophies of William James and Alfred North Whitehead serve as the foundation for a thorough and pertinent critique of capitalism and consumerism. Our age seems to actualize Aldous Huxley's dystopia and the Orwellian nightmare, but "the global systemic crisis is only starting." The philosophical search for "broader generalities" can lead to a novel society that, instead of promoting atomism, conformism and infantilization, fosters individuation, solidarity and culture. - Maria-Teresa Teixeira, University of Coimbra, PortugalThis book comes just in time, and it comes with a pragmatically and politically relevant reflection on time through the process philosophies of A.N. Whitehead and William James. Weber insists that the energetic, biospheric, demographic and social crises we face today are products of the underlying political crisis of globalized capitalist ideology. At times extreme and even shocking, Weber uses his finely honed intellect in an effort to shake us out of our collective sleepwalk into disaster. - Paul Stenner, Professor of Social Psychology, The Open University, UKWeber offers fresh perspectives and new insights into the nature of domination and servitude, how domination operates in the present, and where it is leading us. It is not just the breadth and depth of this essay, and the integrated studies of philosophical ideas and political contexts through history that is impressive; Weber is offering a path of escape from servitude through the political role that philosophy could and should play. To do so it is necessary to escape from the metaphysics of feudalism that has dominated Western philosophy in the past and embrace the intrinsically radical potential of of philosophy qua philosophy. - Arran Gare, Associate Professor, Swinburne University of Technology, Melbourne, AustraliaThe interplay of two streams of thought form the basis for this philosophical essay. One revisits James' radical empiricism and generalizes it to politics; the other endeavors to think the current global systemic crisis as the last burst of international capitalism. Weber uses Marx and Whitehead to argue that Marx's ideal and pragmatism should be preserved, together with his twin concepts of class consciousness and class struggle. His concept of class, however, needs some new foundations, and his materialism and determinism would be advantageously replaced by Whitehead's panexperientialism and creativity.