The Origins of the History of Oman

- The Kitab Al-Ansab by Al-Awtabi 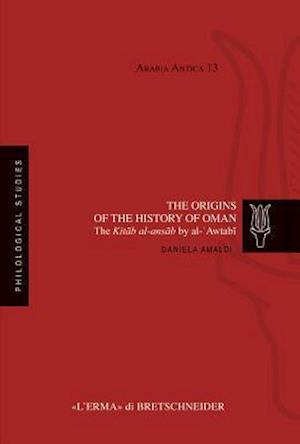 The special importance of the Kitb al-ansab (The book of genealogies) from al-'Awtab -- an Omani historian who lived in the 11th century -- is that it is the first historiographic source related to Oman. Therefore, al-'Awtab presents the history of Oman from the descendants of Noah to the fall of the Umayyads (750). At this point, the narration ends abruptly. But the present study concerns the pages devoted to the age that preceded the diffusion of Islam, particularly the period when Arab tribes began to arrive in Oman. Because of the disaster of the Ma'rib dam the majority of inhabitants are forced to leave the town looking for a new home. Regarding migration, according to Arabian tradition, the Azd tribe seem to have separated into different groups of which one, guided by Mlik b. Fahm, arrived in Oman. So, with his actions and words, the brave chief of the Azd determined the first arabization of Oman. The story narrated by al-'Awtab, following a temporal order of facts, is full of suggestions and includes particularly interesting aesthetic and literary points of view. It is mainly a fictional reconstruction of the events. This narration suggests that al-'Awtab assembled the written Arabic sources with oral Omani traditions. It is a story whose function was to recount the arrival of the Azd in Oman and to highlight the origins of this territory and its inhabitants.