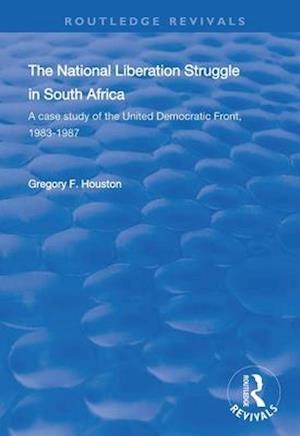 First published in 1999, this volume follows the interactions between the United Democratic Front (UDF) and the African National Congress (ANC) and Pan Africanist Congress (PAC), which had adopted more revolutionary strategies after their banning in 1960, over the period 1983-87. Only a few studies of the UDF have aimed to link revolutionary developments in 1980s South Africa with theories of revolutionary strategy and tactics. This volume focuses on the relation between revolutionary theory, praxis and the formation, aims, policies and practices of the UDF. Houston argues that the formulation of the UDF met certain strategic and tactical requirement of Lenin and Gramsci's theories of revolutionary strategy, repositioning the UDF as becoming a Leninist vanguard party, with its affiliate membership operating largely underground. The volume features 6 detailed maps of the Cape Town area, the Republic of South Africa in the 1980s, the Johannesburg area, the Durban area, the Pretoria area and the Northern Transvaal.