- The Tiktok sensation and romcom of the year!

indgår i serie The Love Hypothesis 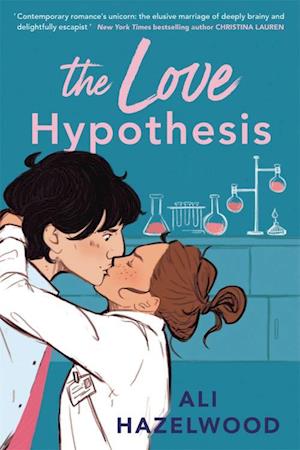 “The Love Hypothesis” by Ali Hazelwood is a heart melting love book which throws scientific beliefs and breathtaking love into a mix of real chaos.

The young and smart Olive Smith is a third-year Ph.D. candidate. She does believe in science but not in long lasting relationships or love in general. Her best friend does and requires proof in a scientific way. In panic Olive kisses the first man she sees.

The lucky guy is a young hot professor called Adam Carlsen. Adam agrees to be Olive’s fake boyfriend to keep her charade. Even though it seems like a plan it turns out different when a big science conference goes haywire. The hypothesis of love seems to be complicated for Olive but not as complicated as putting her own heart out there.

With “The Love Hypothesis” Ali Hazelwood proves to us that you cannot fight true love - even if you try.

Ali Hazelwood made TikTok go crazy with “The Love Hypothesis” - and it would only be a matter of time before he is on everyone’s lips.