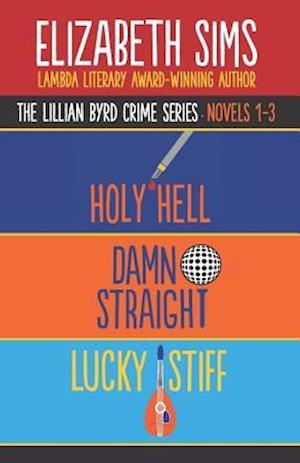 This is a collection of the first three Lillian Byrd Crime Novels by Elizabeth Sims. They're all here, full and complete Reviewers are saying: "Elizabeth Sims offers readers a rare combination of a good mystery plot with solid writing, whole characters and dialogue that doesn't sound like it's been wrenched out of a bad made-for-TV movie. There's a wonderful irreverence to Sims's Lillian Byrd and a bizarre realism to the individuals she encounters." "Sims's suspenseful plot moves fast and is full of surprising turns and quirky, engaging characters." "The author has delivered a smorgasbord-humor, sex, gore, and a dyke I enjoyed meeting." "Really well written and completely lacking in the pompousness that often plagues the genre." "Your evening read will keep you up till dawn." HOLY HELL

Lillian Byrd is a small-time reporter with a flair for making big-time mistakes--like getting fired for fending off the boss's son with an X-Acto knife and breaking up with her girlfriend for no good reason--so her investigation into the disappearances of women in the Detroit area might not be the best idea. But when one of the missing women turns up dead and Lillian recognizes the bizarrely mutilated corpse, she's in too deep to get out. Of course, it doesn't help that she's still fighting off the boss's son and ducking the aggressively amorous overtures of the roughest dyke in town. Now, after simultaneously blowing the case for the police and revealing herself to the off-kilter killers, she's completely on her own. Can she catch the murderers before they catch up with her? DAMN STRAIGHT

After her narrow brush with death in HOLY HELL, you'd think Lillian Byrd would have learned to keep her head down, but when a friend in crisis calls from California, Lillian jumps on a plane and wings her way from Detroit to Palm Springs---and danger. It's the long weekend of the Dinah Shore golf tournament, the wildest women's sporting event in the world, when thousands of lesbians descend on the desert and take over. At a pre-championship party, Lillian leaps into a slippery romance with a top LPGA star. But her superstar athlete has a secret: Someone is quietly terrorizing her. Lillian, eager to help, goes undercover as a high-profile reporter, an unhinged nun, and a professional caddie while uncovering layer after disturbing layer of of the golfer's past. Finally, with violence erupting at every turn, Lillian uncovers her lover's ultimate horrifying secret--and it is not at all what she had guessed. With this book, Elizabeth Sims presents another nail-biting thriller featuring her oh-so-human amateur detective. DAMN STRAIGHT sizzles and zings and will have you laughing through your shivers. LUCKY STIFF Once again Lillian Byrd is down on her luck, strumming her mandolin for spare quarters alongside Blind Lonnie, Detroit's resident blues guitarist. But a chance encounter with her childhood friend Duane is about to completely capsize her life. One summer night when Lillian was 12, flames ripped through the Polka Dot, a bar owned and run by her parents. Three bodies were found in the ashes: those of her mother, her father, and the barmaid, Trix Hawley. Or so Lillian has always thought. But when Lillian and Duane put their stories together, the past erupts into a wild enigma. As the two friends travel, accompanied by the tenacious crime writer Minerva LeBlanc, to the underbelly of Las Vegas to find the truth about their parents, Lillian must face the demons of the past in ways she never dreamed possible. With LUCKY STIFF, the author of the best-selling Lillian Byrd Crime Series has crafted yet another white-knuckle thriller. Buy this set at a great value, and enjoy pure reading satisfaction