The Life and Death of Mary Wollstonecraft 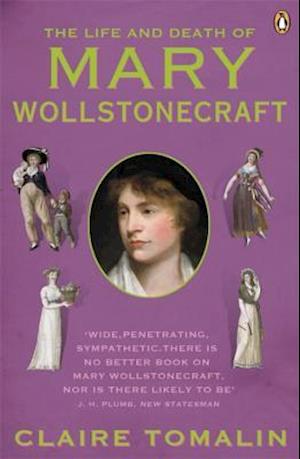 The Life and Death of Mary Wollstonecraft is the acclaimed bestselling biography by Claire TomalinWinner of the Whitbread First Book PrizeWitty, courageous and unconventional, Mary Wollstonecraft was one of the most controversial figures of her day. She published A Vindication of the Rights of Women; travelled to revolutionary France and lived through the Terror and the destruction of the incipient French feminist movement; produced an illegitimate daughter; and married William Godwin before dying in childbed at the age of thirty-eight. Often embattled and bitterly disappointed, she never gave up her radical ideas or her belief that courage and honesty would triumph over convention.'Tomalin is a most intelligent and sympathetic biographer, aware of her impetuous subject's many failings, yet with the perception to present her greatness fairly. She writes well and wittily' Daily Telegraph'A vivid evocation not only of what Mary went through but also of how women lived in the second part of the eighteenth century. Most of all, however, Tomalin makes Mary Wollstonecraft unforgettable' Evening StandardFrom the acclaimed author of Samuel Pepys: The Unequalled Self, Charles Dickens: A Life and The Invisible Woman, this celebrated biography is the definitive account of Mary Wollstonecraft's life.Claire Tomalin is the award-winning author of eight highly acclaimed biographies, including: The Life and Death of Mary Wollstonecraft; Shelley and His World; Katherine Mansfield: A Secret Life; The Invisible Woman: The Story of Nelly Ternan and Charles Dickens; Mrs Jordan's Profession; Jane Austen: A Life; Samuel Pepys: The Unequalled Self; Thomas Hardy: The Time-Torn Man and, most recently, Charles Dickens: A Life. A former literary editor of the New Statesman and the Sunday Times, she is married to the playwright and novelist Michael Frayn.