The Invention of Russia

- The Journey from Gorbachev's Freedom to Putin's War 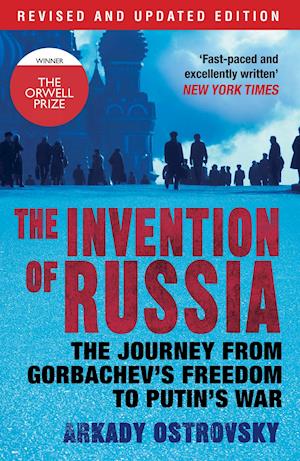 WINNER OF THE ORWELL PRIZE 2016REVISED AND UPDATED EDITIONHow did a country that embraced freedom over twenty-five years ago end up as an autocratic police state bent once again on confrontation with the West? In this Orwell Prize-winning book, Arkady Ostrovsky reaches back to the darkest days of the Cold War to tell the story of Russia's stealthy and largely unchronicled post-Soviet transformation.Ostrovsky's knowledge of many of the key players allows him to explain the rise of Vladimir Putin and to reveal how he pioneered a new form of demagogic populism. In a new preface he examines Putin's influence on the US election and explores how his methods - weaponizing the media and serving up fake news - came to enter Western politics.

Forfattere
Bibliotekernes beskrivelse The timely and gripping story of Russia since the collapse of Communism, by The Economist's Moscow bureau chief.PRIZES:Winner of Orwell Prize 2016