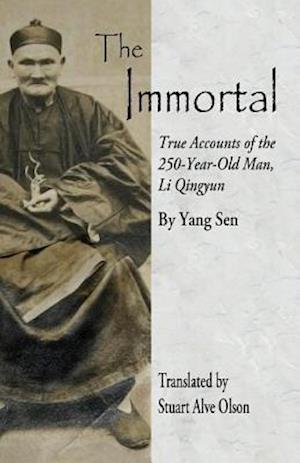 In 1927, General Yang Sen invited Li Qingyun to Wanxian, China, to teach about health and longevity. Li Qingyun was reported to be 250 years old at the time, and his visit to Wanxian was big news. In 1970, Yang Sen compiled a book of his and others' accounts of Li Qingyun, titled An Authentic and True Record of a 250-Year-Old Man, which Stuart Alve Olson started translating into English in 1982. Besides the notion of someone living to 250 years of age, this book goes well beyond the biography of Li Qingyun's life. It has great historical value, especially for Westerners who are unfamiliar with much of Chinese history towards the end of the Qing dynasty. It also explains incredible health therapies and provides information on what is now called Medical Qigong. Much is explained about Daoism on meditation, breathing, qigong exercise, food, sex, and philosophy for Daoist living. Another true gem of this book is the philosophical teachings, as much of this material has never been presented in English. The depth of information provided in this book surpasses any previously published work on Daoist health practices and philosophy. It is rare to come across a text with such abundance of insights and written with such clarity as this material provides. Although Qigong Teachings of a Taoist Immortal: The Eight Essential Exercises of Master Li Ching-yun was published in 2002, which includes translations from Yang Sen's book, the entire translation is now finally available. This book belongs in everyone's library who studies or has an interest in Chinese philosophy, qigong regimes, and biographies. A companion DVD-Li Qingyun's Eight Brocades-is now available.