- A City in Flames 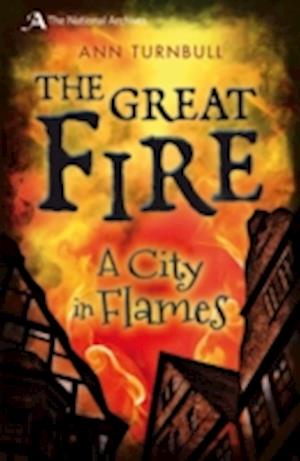 A thrilling historical adventure based on documents from the National Archives. Orphan Sam has survived the Great Plague, but his chance at a new life goes up in smoke when a fire breaks out on Pudding Lane."In sixteen hundred and sixty-six, London burned like rotten sticks."Left alone and homeless by the Great Plague, Sam struggled to survive. He was lucky to get a job working for the Giraud family. Though Andre, the son of his boss, doesn't make life easy. And then a fire breaks out on Pudding Lane. Before anyone fully realises what's happening, London's burning... and this fire can't be put out. Now it's time for Sam to prove what he's really worth. If he can get out alive...A thrilling historical adventure produced in partnership with the National Archives. Sam's previous adventure is The Great Plague: A Cross on the Door is also available from Bloomsbury Education.

Forfattere
Bibliotekernes beskrivelse Sam survived the Great Plague and found a new home, as a servant of the Giraud family. But now he faces disaster once more: London is in flames. Sam is trapped in the burning city with his old enemt Andre. Can the boys stop fighting long enough to escape the terrifying blaze?"