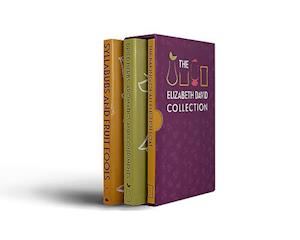 In 1965 Elizabeth David opened a shop in Pimlico, London, where she sold Le Creuset pans and other hard-to-get-hold-of kitchen utensils. The store, with its marvelous window displays, was as influential as her books would eventually be, pioneering a new generation of shops devoted exclusively to kitchenware. Rosi Hanson, who worked in David's shop for two years says, "She was good fun, and the shop was magical. She rather loved being a shopkeeper, perhaps because it gave her a rest from writing. If someone wanted some very specific piece of equipment, I often heard her say: 'If you could come back, I think I may have one at home.'" While she was still involved with the shop which bore her name, Elizabeth David Ltd, she produced a series of four little booklets: The Baking of an English Loaf, Dried Herbs, Aromatics and Condiments, English Potted Meats and Fish Pastes and Syllabubs and Fruit Fools which were sold exclusively in the shop. They were simple black and white productions which have now become rare, highly sought-after and very expensive collector's items. So Grub Street is delighted to have acquired the rights to these booklets from the David Estate and we are redesigning them as four hardback books in a slip case with specially commissioned beautiful artwork making them the perfect gift item. So for the first time in over 50 years these charming works will be available once again.

Forfattere
Bibliotekernes beskrivelse Elizabeth David produced a series of simple black and white booklets. Grub Street is delighted to have acquired the rights to these booklets and we are redesigning them as four hardback books in a slip case with specially commissioned beautiful artwork making them the perfect gift item.