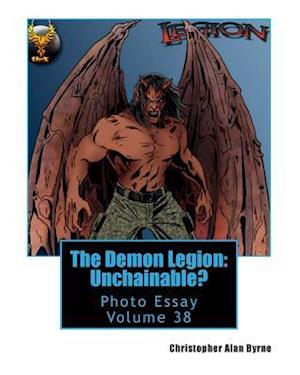 The Demon Legion is photo essay. It is assembled more than 170 art and photo. Legion is found twice to a Bible; including Gospel of Mark and more extensive set of verse Gospel of Luke. A reading or interpretation of image based series of mind or room filling idea are reviewed. Legion is associated of violence, threats and inability to chain the entity. He states little to do of Jesus Christ, and to seek to not be tormented of perceived divides of such. He is noted to dwell across a lake or venture out from town or city; so to note translation of verse into reflection. He lives amongst tombs, and asks to be cast into herd of swine; whom race down steep hill to lake to drown. The essay has 14 Chapter, and consider verse and symbol into visual art form. It is as if to present personal statement at encounter to such entity. 'You are deemed to be dead, and will not to be allowed to speak onto be so slain ' I am not going to offer any more or less an impression than Jesus' dislike of demon life; such as determine one decision basis of life without reflecting of alternative to be dilemma. The essay portrays Medically Educated Physician; who was kidnapped three decade, and to be pronounced dead or else A visual art form present symbol of the entity. No recovered words or interactions were determined found onto the tomb. The essay offers ideal; such as to call a Roman Emperor Nero to be called an anti - Christ. The competition of such has person to be bolted or cement into place; so to watch in humor. A walk over three decade then monitors a rise at perception of the grace of Jesus Christ; so reflect of sort of autism at such manner from threat or violence. Find art of untied shoe laces, and cuffs to simply fall off by writ of law. Topic of swine or pigs to be over valued metaphor of police are considered. The association of 'get out of jail free card is shown'. The rise, fall and exorcism of Legion is topic to the essay. A dilemma of threat to an American way of life or to claim violence to have to speak are reviewed. Police then have clearance to such statement; since to state to merely comfort the dying or end of humanity. A Law of Moses is interpreted 'to go' or 'to walk'. It is modern format of a demon; such as find association of swine or pigs to drown, and is shown or seen at an intent to murder. Variety of story at failure to slay have successes; so in fact at claim of clearance to not be allowed chained. It is then followed to get extremes onto 'final solutions'. Legion is read sort of dilemma; such as shoot to kill orders are given to physicians of their patients. They are detained and to find failure at the taunts of entity; which are topic. The Archangels to include Michael in defense of valor and Raphael to inflict ardor to correct such conduct are included. The difficulty are a forever abyss to impose statement, and find assorted statement; such as claim to ruin a lifestyle of from entity. The differences of human crime versus spirit phenomenon are reviewed. The essay is based to a walk to God; so discover an isolate basis of decision into such claims. The apprehension of images will source of heaven; so to follow Legion to race down incline or hill into worse. No actual existence or human presence is recommended. Differences to Wise Man basis of life are reviewed of name/home; so discover demon to swim of memory in ever more elaborate or difficult claim. The path of greenery onto desert is compared to finding entity to in fact be chained at extremes. The claim to inflict murder or death is shown to be a life amongst the tombs. Defenses include to not form words of idiom statements, or recommend to assess alternative. You find an ever faster pace to do worse? The concept of salvation is framed of better manner of decision; although include the extreme cases of withered face and claws of demon. You find differences to not accept symbol or metaphor to be a language form.