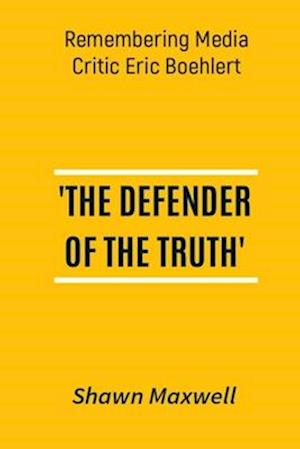 Eric Boehlert (December 6, 1965 - April 4, 2022) was an American journalist, writer, and media critic. He was a senior fellow at Media Matters for America for ten years and a staff writer at both Salon and Billboard.

In 2020, Boehlert started a digital newsletter, Press Run, as a venue for his commentary. He described it as an unfiltered, passionate, and proudly progressive critique of the political press in the age of Trump.

Boehlert was married to Tracy Breslin for 29 years and they had two children. He lived in Montclair, New Jersey, where he was active in various community organizations, including the Commonwealth Club, a social club, where he played on the club's bowling team.

Boehlert was an avid cyclist and his wife said that he often biked at night, wearing reflective gear and using lights on his bicycle. While biking on the evening of April 4, 2022, he was struck and killed by an eastbound NJ Transit train that was coming into Watchung Avenue station in Montclair. Investigators said on April 11 that the safety equipment at the train station was working properly at the time of the crash. A spokesman for NJ Transit confirmed that the lights were flashing and the gates were down, saying, The investigation indicated that safety mechanisms were working as intended at North Fullerton.

THE DEFENDER OF TRUTH is a Book that talks about Eric Boehlert ; his early life, career and personal life. Shawn Maxwell went further to discuss on Ways To Avoid Bicycle Accidents: Cycling Crash Prevention Tips

Quickly click on the BUY NOW to grab copy and gift copies to people you love!!!