The Brutal Blade of Bruno the Bandit Vol. 7

indgår i serie The Brutal Blade of Bruno the Bandit 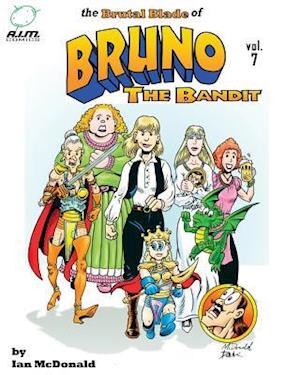 BRING ON THE LADIES The women of Rothland take center stage in this latest volume, and they're all ready to show Bruno who's boss Whether it's former fame vampire Ella, Bruno's cuter-than-cute daughter Ddelorus, the amorous Xantippa, or feisty sidekick Fiona, they all put Bruno in his place in "Bruno's Queen". Later, there's the distant chimes of wedding bells as some of our "Couples" set themselves up to get hitched Meanwhile, Bruno's parents take a trip down a convoluted memory lane. Finally, the Mother Confuser helps Bruno find out whether Ricardo Aisa really is the good kind in "The Good Guy". To top it all off, you get a peek behind the creative process in "Rough Strips". Settle in for another wild ride as the women show the men how it's done, and once again, some of the best comics on the web become some of the funniest comics in self-publishing.