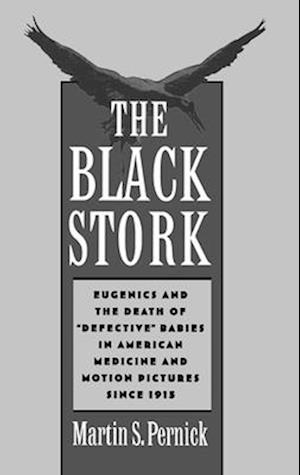 In the late 1910s Dr. Harry J. Haiselden, a prominent Chicago surgeon, electrified the nation by allowing the deaths of at least six infants he diagnosed as "defectives". Seeking to publicize his efforts to eliminate the "unfit", he displayed the dying infants to journalists, wrote about them for the Hearst newspapers, and starred in a feature film about his crusade. Prominent Americans from Clarence Darrow to Helen Keller rallied to his support. The Black Stork tells this startling story, based on newly-rediscovered sources and long-lost motion pictures, in order to illuminate many broader controversies. The books shows how efforts to improve human heredity (eugenics) became linked with mercy-killing (euthanasia) and with race, class, gender and ethnic hatreds. It documents how mass culture changed the meaning of medical concepts like "heredity" and "disease", and how medical controversies helped shape the commercial massmedia. It demonstrates how cultural values influence science, and how scientific claims of objectivity have shaped modern culture. While focused on the formative years of early 20th century America, The Black Stork traces these issues from antiquity to the rise of Nazism, and to the "Baby Doe", "assistedsuicide" and human genome initiative debates of today.

Forfattere
Bibliotekernes beskrivelse In the 1910s, Dr Haiselden allowed the deaths of six infants he diagnozed as "defectives". His story highlights many other controversies. The book shows how efforts to improve human heredity became linked with euthanasia and shows how mass culture changed the meaning of concepts like "heredity". 14 pp halftones