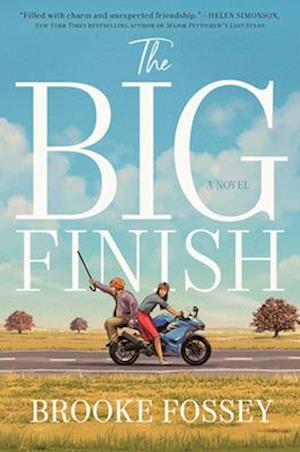 Meet Duffy, an old curmudgeon who lives in an assisted living home.

Meet Josie, a desperate young woman who climbs through his window.

Together, they're going to learn it's never too late--or too early--to change your ways.

For Duffy Sinclair, life boils down to one simple thing: maintaining his residence at the idyllic Centennial Assisted Living. Without it, he's destined for the roach-infested nursing home down the road--and after wasting the first eighty-eight years of his life, he refuses to waste away for the rest. So, he keeps his shenanigans to the bare minimum with the help of his straight-laced best friend and roommate, Carl Upton. But when Carl's granddaughter Josie climbs through their bedroom window with booze on her breath and a black eye, Duffy's faced with trouble that's sticking around and hard to hide--from Centennial's management and Josie's toxic boyfriend. Before he knows it, he's running a covert operation that includes hitchhiking and barhopping. He might as well write himself a one-way ticket to the nursing home...or the morgue. Yet Duffy's all in. Because thanks to an unlikely friendship that becomes fast family--his life doesn't boil down the same anymore. Not when he finally has a chance to leave a legacy. In a funny, insightful, and life-affirming debut, Brooke Fossey delivers an unflinching look at growing old, living large, and loving big, as told by a wise-cracking man who didn't see any of it coming.