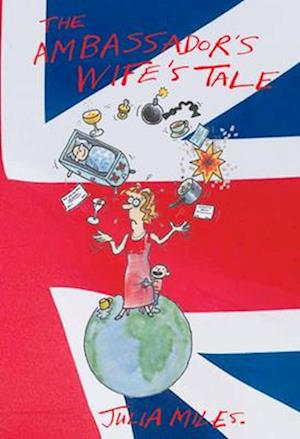 Who really looks after British interests abroad? Behind the pomp of the Foreign and Commonwealth Office, another powerful force is busily but discreetly propping up the image of UK plc.For 28 years, Julia was a diplomatic spouse, juggling a growing family while supporting the demands of her husband's role. Sometimes hilarious, sometimes terrifying, she reveals the realities of life as an ambassador's wife, from food shortages to terrorist incidents to rubbing shoulders with the Queen, Mrs Thatcher and George Best - and rubbing knees with Mikhail Gorbachev.Light-hearted in style, The Ambassador's Wife Tale has a serious core message: that the diplomatic wife stands centre-stage as the drama of world affairs unfolds.

Forfattere
Bibliotekernes beskrivelse Upheaval in Cyprus, privation in Saudi Arabia, house arrest in Libya following the shooting of PC Yvonne Fletcher in London - Julia Miles' memoir of life as a diplomat's wife charts the highs and lows of embassy life