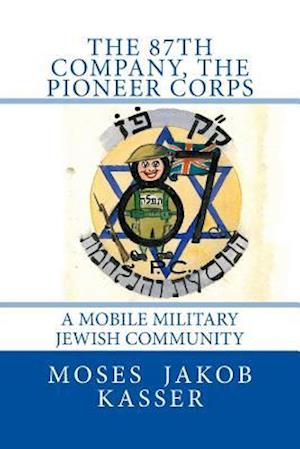 History books tend to describe what happened, but the thoughts, feelings and the day-to-day details are missing. This book fills a little of the gap at least as far as the German Jews who served in the Pioneer Corps in the Second World War are concerned.Moses Jakob Kasser arrived in England in March 1939 as a refugee from Nazi Germany. When the war broke out, he volunteered to serve in the British army and was placed in the 87th Company of the Alien Pioneer Corps together with a number of other Jewish volunteers with a German background. He was ultra-orthodox and his lifetime of service to Anglo Jewry began in a very small way when he became the unofficial Jewish chaplain to his unit. A number of his wartime sermons and some of the artwork they used for services and other commemorations have survived and what he had to say then is as valid today as it was then. This book also contains copies of some of his correspondence in their original English, German, Hebrew and Yiddish providing a treasure trove of material for further research. I did this after long deliberation because in this form the book is an educational resource for many different types of projects. I have only translated some of the letters and draft letters where they clarify some of the situations in the writings.This book also describes a number of incidents including what happened after the official Jewish Chaplain had the audacity to repeat his previous year's Yom Kippur sermon on the following Rosh Hashanah and accidently omitted a page without noticing, while his audience did and that led to some 'fighting in Britain'.