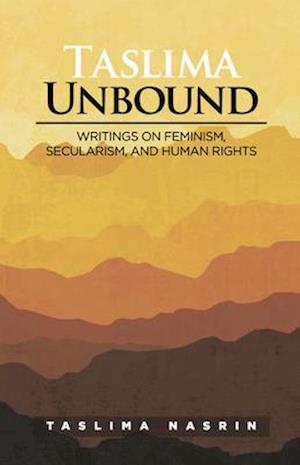 Internationally acclaimed Bangladeshi writer Taslima Nasrin brings together for the first time in English a compelling collection of her work written over a period of thirty years. In this powerful selection of essays, Taslima confronts issues of women's oppression and gender inequality, freedom of speech, and religious violence. In bold, pragmatic style, her language of protest challenges the androcentric paradigms that have dictated the female experience for millennia. Taslima unflinchingly questions long held views on marriage, effects of religious rituals on women, prostitution, genital mutilation, divorce, and sexual assault, among many other crucial issues.

Forced into exile after being expelled from Bangladesh for her frank and brave writing, Nasrin has been a heroic and courageous voice throughout the world, with many of her works topping the bestseller lists. Taslima Unbound captures the essence of her life's work and is key for those seeking to gain a deeper understanding of this celebrated feminist writer.

Taslima Nasrin has been the recipient of the Woodrow Wilson Fellowship, the UNESCO-Madanjeet Singh Prize for the promotion of tolerance and non-violence, the Simone de Beauvoir Prize, an honorary doctorate from the American University of Paris, among many other important recognitions.