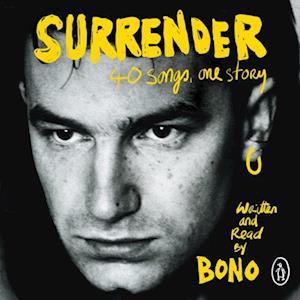 Brought to you by Penguin.Bono - artist, activist and the lead singer of Irish rock band U2 - has written his autobiography: honest and irreverent, intimate and profound, Surrender is the story of the remarkable life he's lived, the challenges he's faced and the friends and family who have shaped and sustained him.Narrated by the author, SURRENDER is an intimate, immersive listening experience, telling stories from Bono's early days in Dublin, to joining a band and playing sold out stadiums around the world with U2, plus his more than 20 years of activism. Throughout a remarkable life, music has always been a constant for Bono and in the audiobook, his distinctive voice is interwoven with a very personal soundtrack adding atmosphere and texture to each and every scene. From moments of classic U2 hits to snippets by The Clash, Patti Smith, Verdi, Johnny Cash and Mozart, SURRENDER also exclusively features clips of newly recorded reimagined versions of U2 songs including 'Sunday Bloody Sunday', 'With Or Without You', 'One', 'Beautiful Day' and more, glimpsed for the first time on 'SURRENDER: 40 Songs, One Story'.As one of the music world's most iconic artists and the cofounder of organizations ONE and (RED), Bono's career has been written about extensively. But in Surrender, it's Bono who picks up the pen, writing for the first time about his remarkable life and those he has shared it with. In his unique voice, Bono takes us from his early days growing up in Dublin, including the sudden loss of his mother when he was 14, to U2's unlikely journey to become one of the world's most influential rock bands, to his more than 20 years of activism dedicated to the fight against AIDS and extreme poverty. Writing with candour, self-reflection, and humour, Bono opens the aperture on his life - and the family, friends and faith that have sustained, challenged and shaped him.Surrender's subtitle, '40 Songs, One Story,' is a nod to the book's 40 chapters, which are each named after a U2 song.'Bono's new memoir, Surrender, elevates the audiobook into an art form.' The Times'It is such an incredible listen.' Zoe Ball'If ever a memoir was designed for audio this is it' Financial Times(c) Bono 2022 (P) Penguin Audio 2022