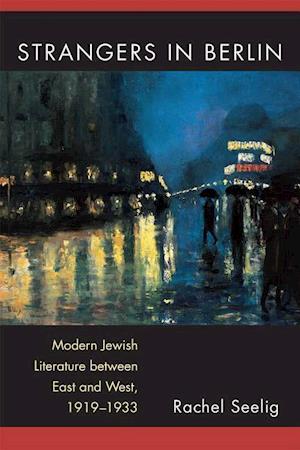 Berlin in the 1920s was a cosmopolitan hub where for a brief, vibrant moment German-Jewish writers crossed paths with Hebrew and Yiddish migrant writers. Working against the prevailing tendency to view German and East European Jewish cultures as separate fields of study, Strangers in Berlin is the first book to present Jewish literature in the Weimar Republic as the product of the dynamic encounter between East and West. Whether they were native to Germany or sojourners from abroad, Jewish writers responded to their exclusion from rising nationalist movements by cultivating their own images of homeland in verse, and they did so in three languages: German, Hebrew, and Yiddish.

Author Rachel Seelig portrays Berlin during the Weimar Republic as a "threshold" between exile and homeland in which national and artistic commitments were reexamined, reclaimed, and rebuilt. In the pulsating yet precarious capital of Germany's first fledgling democracy, the collision of East and West engendered a broad spectrum of poetic styles and Jewish national identities.