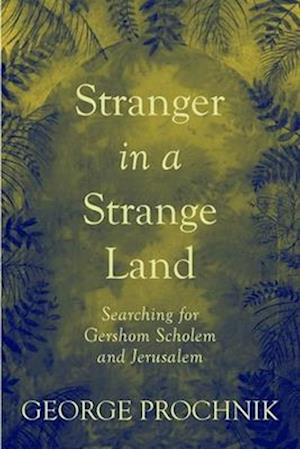 Taking his lead from his subject, Gershom Scholem--the 20th century thinker who cracked open Jewish theology and history with a radical reading of Kabbalah--Prochnik combines biography and memoir to counter our contemporary political crisis with an original and urgent reimagining of the future of Israel. In Stranger in a Strange Land, Prochnik revisits the life and work of Gershom Scholem, whose once prominent reputation, as a Freud-like interpreter of the inner world of the Cosmos, has been in eclipse in the United States. He vividly conjures Scholem's upbringing in Berlin, and compellingly brings to life Scholem's transformative friendship with Walter Benjamin, the critic and philosopher. In doing so, he reveals how Scholem's frustration with the bourgeois ideology of Germany during the First World War led him to discover Judaism, Kabbalah, and finally Zionism, as potent counter-forces to Europe's suicidal nationalism. Prochnik's own years in the Holy Land in the 1990s brings him to question the stereotypical intellectual and theological constructs of Jerusalem, and to rediscover the city as a physical place, rife with the unruliness and fecundity of nature. Prochnik ultimately suggests that a new form of ecological pluralism must now inherit the historically energizing role once played by Kabbalah and Zionism in Jewish thought.