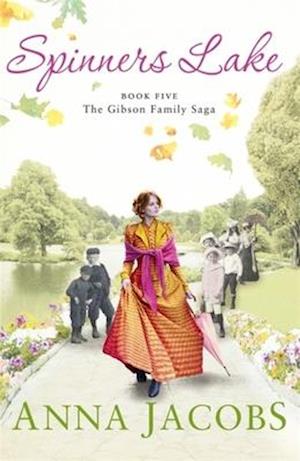 The final novel in the heartwarming Lancashire-based Gibson Family series by beloved saga author Anna Jacobs.It is 1860 in Bilsden, the Lancashire mill town, and Frederick Hallam is dying. But first he makes secret plans to smooth the future path for his beloved wife Annie. Her sister, Joanie, is fed up with everything until a dshing new admirer crosses her path. But a spurned suitor is determined that Joanie will be his, whatever the cost. And he is not the only one who wants to harm the Gibson family. Meanwhile the Civil War in America cuts off cotton supplies, so that times are hard in Bilsden and unemployment is rife. Annie had to rebuild her life after her husband's death and plans to create Spinners Lake, an extraordinary project that will keep her workers from destitution and assuage her own grief. Tian Gilchrist is caught up in the American war and nearly dies there. He fights his way back to Bildsen, to Annie, whom he has never forgotten. And the plans that Frederick made for Annie will change her life in unforeseen ways, bringing her hope and happiness once again...