- Studies in Social Rank and Communication 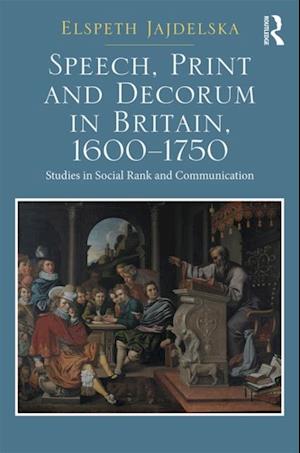 Filling an important gap in the history of print and reading, Elspeth Jajdelska offers a new account of the changing relationship between speech, rank and writing from 1600 to 1750. Jajdelska draws on anthropological findings to shed light on the different ways that speech was understood to relate to writing across the period, bringing together status and speech, literary and verbal decorum, readership, the material text and performance. Jajdelska's ambitious array of sources includes letters, diaries, paratexts and genres from cookery books to philosophical discourses. She looks at authors ranging from John Donne to Jonathan Swift, alongside the writings of anonymous merchants, apothecaries and romance authors. Jajdelska argues that Renaissance readers were likely to approach written and printed documents less as utterances in their own right and more as representations of past speech or as scripts for future speech. In the latter part of the seventeenth century, however, some readers were treating books as proxies for the author's speech, rather than as representations of it. These adjustments in the way speech and print were understood had implications for changes in decorum as the inhibitions placed on lower-ranking authors in the Renaissance gave way to increasingly open social networks at the start of the eighteenth century. As a result, authors from the lower ranks could now publish on topics formerly reserved for the more privileged. While this apparently egalitarian development did not result in imagined communities that transcended class, readers of all ranks did encounter new models of reading and writing and were empowered to engage legitimately in the gentlemanly criticism that had once been the reserve of the cultural elites. Shortlisted for the European Society for the Study of English (ESSE) book prize 2018