- Studies in the Development of Social Services at the Local Level 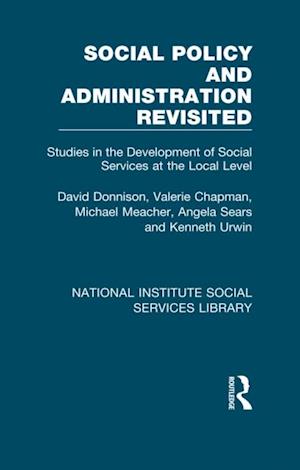 Originally published in 1965, this standard work sets out to explore the questions: What is 'social administration', and how can people prepare themselves for this work? It shows the social services in continuous evolution in response to political, economic and social change, and it ends with a deeply thoughtful and thought-provoking analysis of the processes and causes of this evolution, and of the different contributions to change made by the various parties concerned. This analysis is based on the case studies presented in the book's central chapters.Of this new version of the book, first published in 1975, Professor Donnison wrote:'The first three chapters of the original book have been scrapped and a new introduction to the whole subject takes their place - an introduction not only to the literature about social policy and administration but to the 'point' and purpose of the subject (for students who, rightly, expect to be convinced about this before devoting their time to it).Then follow eight case studies of innovations in the work and policies of local units of the social services - including housing, education, a home help service, planning and legal aid, besides social work services. These are the original studies untouched. I have returned to each agency and found out what has happened since our original studies, adding a postscript to each, outlining the main developments since the original research, ten to twenty years ago. I don't think anyone has ever done that before. In most cases the innovating trends we identified have gone further, often becoming national orthodoxy by now. The one (on legal aid) where unexpected developments have occurred is at least as interesting.'Professor Donnison has added a ninth case study - of the Department of Social Administration at the London School of Economics where he was working when the original studies were made (Professor Richard Titmuss was head of the department at that time). This study traces the development of education for social workers at a seminal stage and the difficult problems which had to be resolved when major new departures occurred in this field. The chapter will be of lasting interest to historians of social work and social work education in Britain, besides throwing light on the process of innovation in social policy.