Should A Doctor Tell?

- The Evolution of Medical Confidentiality in Britain 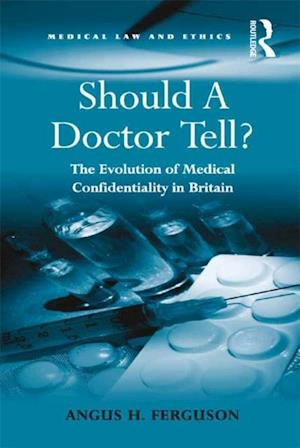 Medical confidentiality has long been recognised as a core element of medical ethics, but its boundaries are under constant negotiation. Areas of debate in twenty-first century medicine include the use of patient-identifiable data in research, information sharing across public services, and the implications of advances in genetics. This book provides important historical insight into the modern evolution of medical confidentiality in the UK. It analyses a range of perspectives and considers the broader context as well as the specific details of debates, developments and key precedents. With each chapter focusing on a different issue, the book covers the common law position on medical privilege, the rise of public health and collective welfare measures, legal and public policy perspectives on medical confidentiality and privilege in the first half of the twentieth century, contestations over statutory recognition for medical privilege and Crown privilege. It concludes with an overview of twentieth century developments. Bringing fresh insights to oft-cited cases and demonstrating a better understanding of the boundaries of medical confidentiality, the book discusses the role of important interest groups such as the judiciary, Ministry of Health and professional medical bodies. It will be directly relevant for people working or studying in the field of medical law as well as those with an interest in the interaction of law, medicine and ethics.