- A Story of Shattered Lives, Miracles and Destiny

indgår i serie The Braids of Kaminari 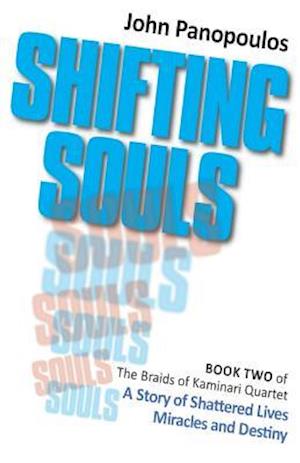 SHIFTING SOULS is Book two of THE BRAIDS OF KAMINARI quartet

Book One, VENDETTA IN ARCADIA told of a blood feud that would not end, how a single spontaneous act of violence brought an abrupt end to a profound love story and of the physical, emotional and spiritual consequences that reverberated throughout the hills and valleys of glorious Arcadia.

SHIFTING SOULS continues the story of Kostas and Vasili, two young men from warring clans, . one the injured and the other the perpetrator, yet both victims. The consequences of a single act of extreme violence spread far and wide and in the end require a blessed Saint to come down and intervene. Father Seraphim, the Far-Seeing Priest with magic in his fingers, plays his part in this all too human yet also other-worldly drama, as do the two remarkable lady healers. The Inner Power that is sometimes glimpsed but so often goes untapped is here pulsing here and never far below the surface.

Alongside the main drama, many side stories of the colorful characters in the community are woven into an extraordinarily rich and vivid multi-dimensional tapestry

THE BRAIDS OF KAMINARI Quartet is a deeply human saga of interwoven lives in the foothills of beautiful and bountiful Arcadia in the late-1800s. Jaw-dropping other-worldly happenings are seamlessly integrated into the lives of the rich variety of memorable characters, bringing 19th century Greece vividly to life, while stretching the limits of our beliefs. The author is no longer with us, but is with his beloved saints and for sure smiling broadly to see his evocative storytelling now available worldwide

The interwoven stories of many characters takes place in a remote mountain area of Arcadia, Greece, around the village of Kaminari in a period in which an isolated way of life, which has prevailed for centuries, is still intact and pretty much untouched by the modern world. The world the book depicts is a stark and archaic one of blood feuds between families, passionate relationships between men and women, and a sense of closeness to the supernatural world, a world where Angels and Demons and natural forces interact with the life of human beings. - Harris Smart, MA.

Harris Smart is an Australian writer and TV Producer and former Fellow in Creative Writing at Stanford University. He is an award winning short story writer and has written seven books including the novel, Passion Play, and the biography Tom Bass Totem Maker.

Storyteller is the term that best describes Greek-American John Panopoulos, his life and his works. John's stories have taken many shapes: poetry, short stories, sculpture - a favorite medium - various forms of visual arts, bedtime tales, good conversations over coffee and of course the Braids of Kaminari quartet. Each piece of artwork tells a story and is deeply rooted in his spiritual and philosophical values.

He found those values in the spiritual movement of Subud, a movement which embraces all cultures and religions, and the inspiration he gained therein shines through his creativity.

Despite identifying so thoroughly with his Greek heritage, John made only one visit to the land of his roots. It was just as he had always seen it in his mind's eye. In the wake of that journey, deeply affected and inspired by the testimonies and folktales, landscapes and faces he found there, he picked up his writers pen and wove the Braids of Kaminari. Almost two decades later, with the assistance of his beloved Olivia, the final draft was completed.