- TikTok made me buy it! The New York Times bestseller 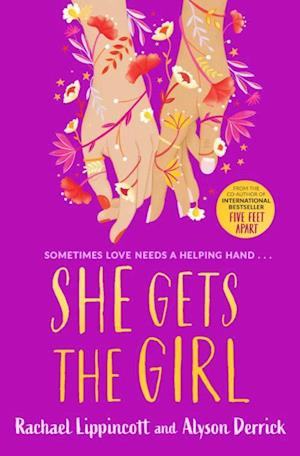 "She Gets the Girl" by Racheal Lippincott and Alyson Derrick is a hilarious and captivating Young Adult rom-com story about two very different young women and their quest for love.

Alex and Molly are two college freshmen on the same campus whose many differences keeps them from getting along initially.

Alex Blackwood is a chaotic and headstrong woman who is also an incorrigible flirt. She is great at getting into relationships, but horrible at staying in them. Molly Parker, on the other hand, is a control freak with a streak of awkwardness a mile wide. She finds it difficult to talk to practically anyone except for her mom. Molly has an enormous crush on Cora Myers, an incredibly cool girl from the campus. Molly's only chance of getting with the girl of her dreams is through getting advice from serial-flirt Alex. Alex graps the opportunity and sees it as a chance to win her ex back by proving to her that she cares about love.

Together Molly and Alex embark on an ingenious five-step plan to make their girls fall in love with them - although their own feelings might surprise them on the way.

Forfatter
Forlagets beskrivelse Read the instant New York Times bestseller and TikTok sensation -- THE new swoon-worthy hate-to-love rom com from #1 New York Times bestselling co-author of Five Feet Apart Rachael Lippincott and debut writer Alyson Derrick. The perfect summer read for fans of Adam Silvera, Casey McQuiston, Becky Albertalli and Alice Oseman's HEARTSTOPPER series!Alex and Molly are two girls who don't belong on the same planet, let alone the same college campus . . . Alex Blackwood is a little bit headstrong, with a dash of chaos and a whole lot of flirt. She knows how to get the girl. Keeping her on the other hand . . . not so much.Molly Parker has everything in her life totally in control, except for her complete awkwardness with just about anyone besides her mum. She knows she's in love with the impossibly cool Cora Myers. She just . . . hasn't actually talked to her yet.When the girls' paths cross unexpectedly, and Alex discovers Molly's hidden crush, they realise they might have a common interest after all. Because maybe if Alex can help Molly to get her dream girl, she can prove to her ex that she's serious about love.As the two embark on their five-step plans to get their girls to fall for them, though, they both begin to wonder if maybe they're the ones falling . . . for each other.Read what everyone is saying about She Gets the Girl:'Adorable. There's no better word to describe this book. It is so full of hilarious & cute moments that it is bursting at the seams.' - Amazon reviewer 'A great sapphic rom-com style story. I truly loved reading this book from start to finish!' - Amazon reviewer 'The ending made me swoon.' - Amazon reviewer 'Both hilarious and poignant, no doubt in my mind that this gem will be one of the best books I read this year.' - Amazon reviewer
Bibliotekernes beskrivelse She's All That meets What If It's Us in this swoon-worthy hate-to-love YA romantic comedy from #1 New York Times bestselling co-author of Five Feet Apart Rachael Lippincott and debut writer Alyson Derrick.