Shakespeare and the Origins of English

- Rhodes, N: Shakespeare and the Origins of English 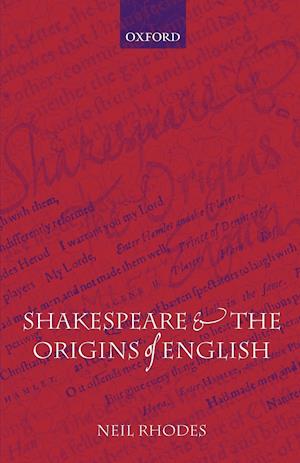 What existed before there was a subject known as English? How did English eventually come about? Focusing specifically on Shakespeare's role in the origins of the subject, Neil Rhodes addresses the evolution of English from the early modern period up to the late eighteenth century. He deals with the kinds of literary and educational practices that would have formed Shakespeare's experience and shaped his work and traces the origins of English in certain aspects ofthe educational regime that existed before English literature became an established part of the curriculum. Rhodes then presents Shakespeare both as a product of Renaissance rhetorical teaching and as an agent of the transformation of English in the eighteenth century into the subject that emerged asthe modern study of English. By transferring terms from contemporary disciplines, such as 'media studies' and 'creative writing', or the technology of computing, to earlier cultural contexts Rhodes aims both to invite further reflection on the nature of the practices themselves, and also to offer new ways of thinking about their relationship to the discipline of English. Shakespeare and the Origins of English attempts not only an explanation of where English came from, but suggests how some of the things that wedo now in the name of 'English' might usefully be understood in a wider historical perspective. By extending our view of its past, we may achieve a clearer view of its future.

Forfattere
Bibliotekernes beskrivelse What did Shakespeare learn at school? Did he study creative writing? This book addresses these and similar questions as the author shows where the modern subject of 'English' came from, and what part Shakespeare played in its formation. By looking at the origins of English we gain a new perspective on the subject as it is practised today.