Saving the Church of England 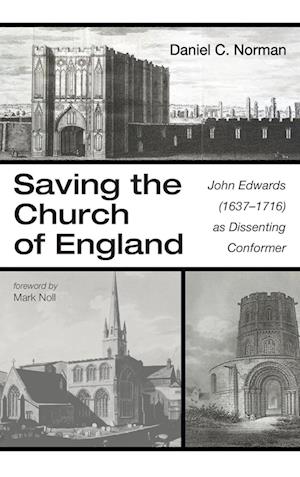 On his second Atlantic voyage, George Whitefield read lengthy quotations from a work of a deceased English cleric. Writing in his journal, he exclaimed, ""[These words] deserve to be written in Letters of Gold."" Whitefield's associate, the American Jonathan Edwards, concurred. That cleric was John Edwards, an anomaly in several respects: a self-proclaimed Calvinist who conformed to the Church of England at a time when most Calvinists left in the Great Ejection of 1662. In leading a public debate against prominent intellectuals of his day, including John Locke and Samuel Clarke, over the definition of orthodox Christianity, he allied himself with the same church leaders who decried his Calvinist theology. Edwards retired in his mid-fifties due to ""ill health""--a retirement in which he wrote over forty scholarly books. At the heart of his concern was the unity and doctrinal orthodoxy of the church, themes over which contentious disputes have reverberated throughout church history. Saving the Church of England tells the story of why the church was in trouble and of John Edwards's heroic effort to save it.