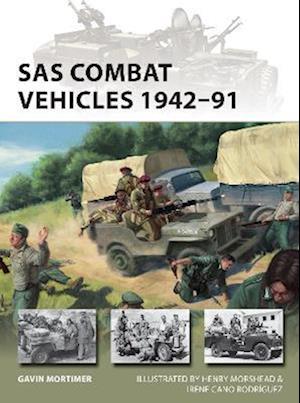 The SAS, the world's most famous special operations unit, made its name in the desert of North Africa, shooting up Axis airfields from specially modified Willys jeeps. Following the start of the El Alamein offensive in October 1942, the SAS used jeeps effectively in reconnoitring and ambushing the retreating Afrika Korps. After the conclusion of the North African campaign, the Willys underwent several small but significant changes, including the introduction of the .303 Browning machine gun.Between June and October 1944, the SAS brigade operated deep inside Occupied France, harassing Germans reinforcements heading to Normandy, calling up air strikes on installations, and carrying out reconnaissance missions - all made possible with jeeps dropped by the RAF. Jeeps were also used in the push into Germany in the spring of 1945. Transported across the Rhine in 'Buffalo' amphibious landing craft, they formed part of the vanguard of the Allied advance, and their agility, speed and firepower proved crucial in crushing fanatical pockets of Nazi resistance. 22SAS in 1952, the regiment adopted the Series 1 Land Rover - introduced in 1948 - as the successor to the Willys jeep. A decade later the Regiment updated to the Series IIA 90 Land Rover, which saw service in the Oman and Aden, where its distinctive colour led to the 'Pink Panther' nickname. In the 1970s, the SAS begin using Range Rovers for covert operations while the Land Rover 110 HCPU became the SAS's new Desert Patrol Vehicle (DPV) in the 1991 Gulf War. This book describes the successful deployment of these combat vehicles in SAS operations from the Second World War to the present day and gives a rare insight into one of the most prestigious and secret forces of modern times.