- The Symbolic Statecraft and Political Culture of the British Labour Party 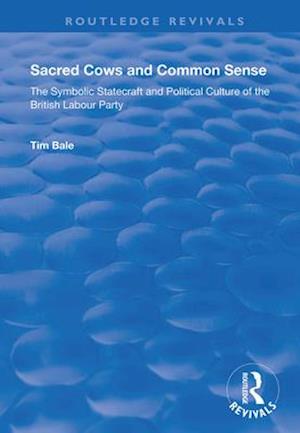 First published in 1999, this volume is based on interviews and research from previously unavailable party, state and private archives, this insightful volume reflects on the interaction between institutional structure and world-view that we call political culture. Using Labour's post-war welfare policy, this informative study makes three key points:The need to break down distinctions between the 'symbolic' and the 'substantial' in politics.The potential of 'Grid-Group' or 'Cultural' Theory as a way of understanding party political culture.The crucial but self-defeating role that welfare policy has played in Labour's efforts to manage itself, win support and govern competently.The well-documented research leads to the conclusion that New Labour's much-heralded desire to 'think the unthinkable' about welfare is largely rhetorical if one recalls what Labour did in office rather than promised in opposition. The Government's welfare reforms, rather than constituting a serious attempt to confront new social realities, are in fact par for the course.Political scientists cannot ignore the new government's past. Political historians need to appreciate the patterns woven in a welter of detail and social democratic defensiveness. By fusing a realist conception of statecraft, an 'interpretavist' interest in symbols and a predictive comparative model of the interaction between ideology and organisation, this authoritative work will enable readers to do just that.