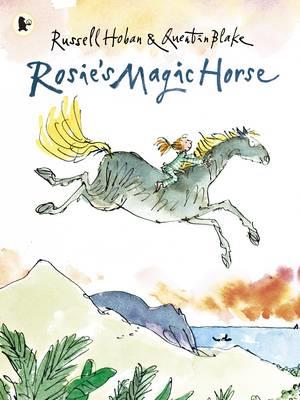 A story that could have come only from the imagination of Russell Hoban, vividly brought to life by the picture-book supremo Quentin Blake.This story begins with an ice-lolly stick. Its sweetness gone, it lies discarded and lonely ... until a little girl called Rosie comes along. She places it carefully in her cigar box, full of other sticks. "Without our ice-lollies we are nothing," says an old stick. But this new stick wants to BE something and into the minds of all the old sticks he plants dreams ... maybe they can be something, too. What about Rosie? That night she dreams of helping her parents pay the bills. And so, at the stroke of midnight, magic and dreams collide and a HORSE gallops out of the cigar box! His name is Stickerino. "Where to?" he asks Rosie. "Anywhere with treasure!" she answers and hops on his back. Then begins an adventure like no other ... ice-lolly mountains by the sea, caskets of gold, and pirates foiled by a stickling ice-cream van.

Forfattere
Bibliotekernes beskrivelse A story that could have come only from the imagination of Russell Hoban, vividly brought to life by the picture-book supremo Quentin Blake.