Revisiting The Polite and Commercial People

- Essays in Georgian Politics, Society, and Culture in Honour of Professor Paul Langford 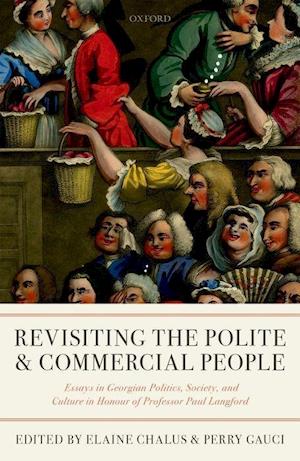 For some time before his death in July 2015, former colleagues and students of Paul Langford had discussed the possibility of organising a festschrift to celebrate his remarkable contribution to eighteenth-century history. It was planned for 2019 to commemorate the thirtieth anniversary of the appearance of his seminal A Polite and Commercial People, the opening volume in the New Oxford History of England series, Paul's best-known and mostinfluential publication. He was delighted to hear of these plans and the tragic news of his death only made the contributors more determined to see the project through to completion. The importance of A Polite and Commercial People within its own time is unquestionable. Not only did it provide a powerful new vision of eighteenth-century Britain, but it also played a vital part in reviving interest in, and expanding ways of thinking about, Georgian history. As the thirteen contributors to this volume amply testify, any review of the field from the 1980s onwards cannot ignore the profound effect Paul's research had on the social and political publications in hisfield. This collection of essays combines reflection on the impact of Paul's work with further engagement with the central questions he posed. In particular, it serves to re-connect various recent avenues of Georgian studies, bringing together diverse themes present in Paul's scholarship, but which are oftenstudied independently of each other. As such, it aims to provide a fitting tribute to Paul's work and impact, and a wider reassessment of the current direction of eighteenth-century studies.

Forfattere
Bibliotekernes beskrivelse This collection of wide-ranging essays commemorates the thirtieth anniversary of Professor Paul Langford's seminal monograph, A Polite and Commercial People: England, 1727-1783, situating Langford's work in recent developments in the political, social, and cultural history of the eighteenth-century, both in Britain and throughout the world. 13 black and white figures/tables