indgår i serie Acts of Valor 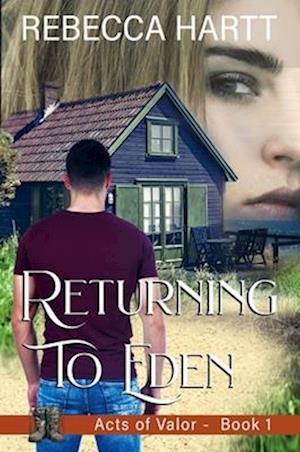 Presumed Dead, Navy SEAL Returns Without Memory of His Ordeal in the Christian Romantic Suspense, Returning to Eden, by Rebecca Hartt -- Present Day, Virginia Beach, Virginia -- A dead man stands at Eden Mills' door. Declared MIA a year prior, the Navy wrote him off as dead. Now, Eden's husband, Navy SEAL Jonah Mills has returned after three years to disrupt her tranquility. Diagnosed with PTSD and amnesia, he has no recollection of their marriage or their fourteen-year-old step-daughter. Still, Eden accepts her obligation to nurse Jonah back to health while secretly longing to regain her freedom, despite the reminiscent attraction she feels. Jonah Mills knows he has work to do. Unfit for active duty, he commits himself to therapy and relies on faith in the loving God who sustained him through torture and hardship to also heal his body, mind and family. But as the memories lurking in his wife's haunted eyes and behind his step-daughter's uncertain smile begin to return to him, a disturbing chain of events is revealed. If his memories are truly real, not only is his career at stake, but so is the welfare of his small, cherished family. Publisher's Note: Fans of Ronie Kendig, Lynnette Eason, Dee Henderson as well as Marliss Melton, Irene Hannon and Colleen Coble, will enjoy this engrossing and heart-stirring series of redemption and rebirth. The Acts of Valor Series

Crying in the Wilderness